A shame actually, as the piece contains some interesting quotes, not least from everybody's favourite bully Nigel Short, having a characteristic hissy fit because he didn't get what he wanted 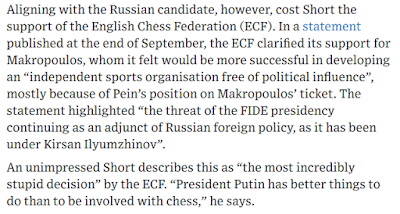 "Incredibly stupid." No fence-mending there from Nigel, who now appears to believe that the Russian Government doesn't interfere in chess politics


President Putin has better things to do than to be involved with chess.

I wonder how long Nigel has held this view? My guess would be from the precise moment he was offered a Vice-Presidency by the former Deputy Prime Minister of Russia.

It has to be pretty recent, anyway, since in June he was describing the same former Deputy Prime Minister of Russia as


basically, an agent of the Russian government

whose role was to exert


Russian soft power, to allow them to control this body in perpetuity.

What an immense hypocrite and bully the man is. Always will be.
Posted by ejh at 8:00 am