Funny thing is I was just wondering whether to renew my subscription. 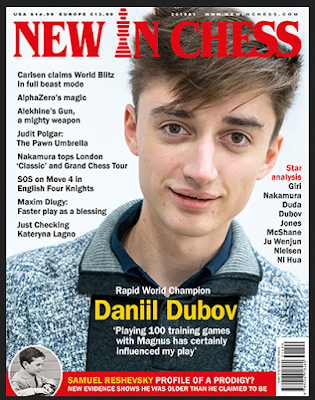 but the rest of it, the last one that I've currently paid for, is late. And if it and when it does turn up, there's not going to be any Nigel Short in it.

This is a good thing.

I'd stopped reading his column some issues back anyway, partly because it really wasn't very well written (too much convoluted phrasing in preference to plain English) but partly because after a few years the combination of ego, obnoxiousness and permanent points-scoring just isn't that compelling any more.

I mean yes, if what you're looking for is controversy 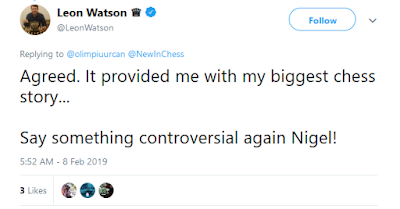 then it's a good thing to have a motormouth on the scene.

But what if you're looking for is for women to be treated with respect? Is that important at all, Leon, or is the controversy the thing?

What if you would like other nationalities to be treated with respect too? What if you find his propensity to bullying and feuding distasteful?

It's not an optional extra, it's the whole man, the whole style. The "controversy" he produces is misogyny, prejudice and bullying. And I think we ought to be able to do better than that.

I'd like that to be the reason he's gone. Of course it isn't, whatever this may actually mean -

but it's the reason why, if and when my copy does turn up, I'll be renewing my subscription.
Posted by ejh at 8:00 am

In would say Justin, what's important is for people to make public what they really believe and if necessary there then to be debate about that - as what happened with Nigel Short.

Whatever side of the fence you are on (and I am on the same side as you) that can only be a good thing. You don't explode myths by hiding them, that's how we got in the position where obstacles to women's participation have been allowed to continue.

These things need to be tackled. The words Nigel chose to use, for example, needed scrutiny and there has been a debate about what he meant.

So yes, I would like all top GMs to speak their mind a bit more, including Nigel. In some cases we might be pleasantly surprised.

There's some merit in that argument, surely. Perhaps also, though, in the argument that Nigel would not (and will not) be prevented from expressing his views just because New In Chess found they preferred to have a different columnist.

I thought Nigel was married