I don't read the British Chess Magazine, since it's full of trash, but I do know people who do, and so I happen to know that for some reason, it has devoted eleven pages of its latest issue to a review of a review.

The review in the first instance (which you've probably seen already) is Olimpiu Urcan's piece discussing Ray and Byron's book on the Caruana-Carlsen match (which you probably haven't). But you might recall that this review was the ostensible reason for Chess and Bridge Magazine ceasing to stock the book.

The review in the second instance is a review of Olimpiu's review.

The BCM is considerably closer to Ray, right now, than is its rival, and the review's appearance, and the book's disappearance from Chess and Bridge, are very much connected.

The review is by Jimmy Adams, and it is a load of old balls from start to finish, including, in just one sentence above, the claim that Olimpiu's website is patreon.com - see the difference, Jimmy? - and a grim inability to actually spell the name of the chap he's criticising, which is Olimpiu, not Olympiu, a misspelling that appears at least twenty times. To be fair Jimmy says more than once that he doesn't go looking for "typos and mistakes" and Lord, that surely is the truth.

I'm not going to give the piece much more attention than it deserves - although if you've read this far, I probably have already - not least because I doubt Jimmy believes very much else of what he wrote. The point of rebutting charges in which the prosecution don't believe in the first place has always eluded me, and this particular indictment is written in a style reminiscent of Bart Simpson 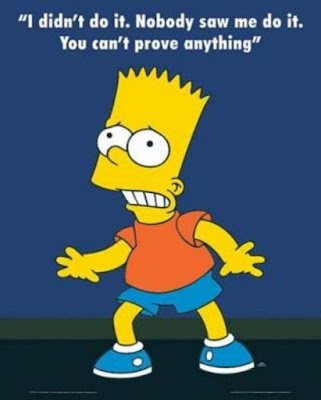 except we might describe Jimmy Adams' version as "there's nothing wrong with this - well only a little - well maybe more, but who cares anyway". Jimmy doesn't, that's for sure.

There's an old saying about not going mud-wrestling with a pig, as there is a newer one about not feeding the trolls. When Jimmy Adams, who has been writing about chess for many years, pretends not to know what's wrong with a writer publishing the same material in several places without saying where it's appeared before - of course he knows. So why bother arguing? It'd constitute getting oneself dirty while the pig enjoys it. That said, this little passage is worth a moment of our time.

I know you don't believe what you're writing, Jimmy, but what are you actually writing here? Chess Notes contains 'essentially "cut and paste"'? In what sense? In some sense comparable to Ray's prodigious recycling of his old material? In some other sense? What, Jimmy, are you talking about?

We don't know, and neither does he. At very least, he doesn't care whether what he's saying makes any sense or not, and that's not an argument, nor an advocate, that you can engage with. What else can you make of this? 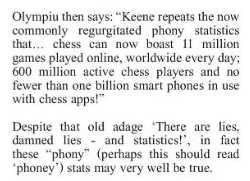 There's no evidence for it, but it "may very well be true". Alas, Jimmy doesn't go on to explain why, because, pffft, anything may be as true as anything else, if I only choose to say so.

As I wrote before:

and Jimmy is not worth reading seriously. (By all means have a go yourself, if you want. But I am not that soldier.)

Still, one more nonsense, just for fun, before we leave Jimmy to his maundering. He attacks Olimpiu for wondering where the term Rossolimo Variation has got to in the book, given that it occurred three times in the match.

Aha, says Jimmy, that's because Ray doesn't give it that name! 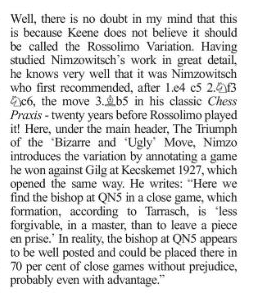 "There is no doubt in my mind", he says. Well, Jimmy, there's plenty of doubt in mine, because I happen to have Ray's book1 on the late Tony Miles 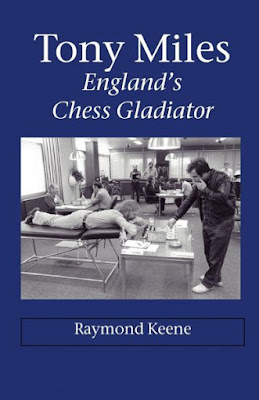 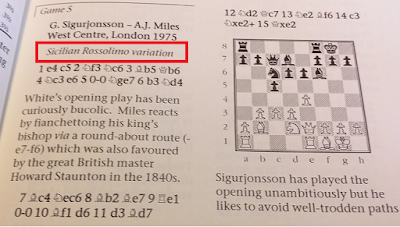 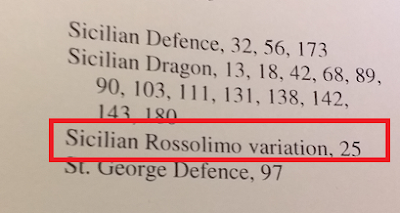 Well, we could be at this game all day, but that's very much what I am trying to avoid: this is rubbish, rubbish produced in defence of rubbish that should never have been produced. Let us waste no further time on it. I have no idea what, specifically, induced Jimmy Adams to go kissing Penguin arse on this occasion

but it's not the first time that a long-established chess writer has chosen to take that path, nor that the BCM has accompanied them on the road. And what a tawdry and disreputable path it is as well. 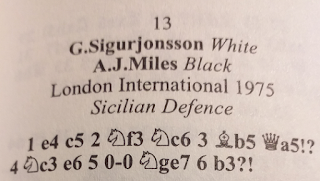 Is it possible that the review is some kind of satirical attack on Ray Keene's latest shit of a book?

Well I often say that when you get past forty it becomes impossible to tell the difference between satire and reality, and I'm fifty-three now.

Winter's writing is full of old stuff. By other people. Quoted with credit. That's why he's an historian.

Keene's writing is full of old stuff. By himself. Which he does not credit. That's why he's a fraud.

While I'm at it, as a non-Brit, why does Keene always refers to himself as "GM Raymond Keene OBE"? Is this just Keene's cartoonish vanity, or is this actually the accepted form in Britain?

I know many PhDs and they virtually never refer to themselves as "Dr. X" unless there is a reason (i.e., in certain academic settings) - and NEVER as "Dr. X, BSc MA PhD". Anybody who did, except as a joke, would be considered a huge blowhard, if not insane.