Ever get the feeling you've been cheated - what would be the point?

I'd like to look at a few positions from some of the games I played on Chess.com.

I've not been through all the games I played on that site. Nor do I intend to: I shouldn't have to and I haven't got the energy.

So why these games and why these positions? Because when Chess.com said I was banned, several games immediately came to mind, in which I remembered (having analysed tham after they were over) having made blunders of one kind or another. Missed wins, missed draws, other weak moves.

Which makes Chess.com's claim all the more incomprehensible. There may be no such thing as computer moves - but there may be such a thing as moves you don't play, if you're seeking to win games with the help of a program. And below, you can see some of them.

Analysis is pretty perfunctory where it's provided at all, because I assume readers have access to computers, and probably better ones than mine. I looked at these with DroidFish running on an Android phone and rarely getting much above 20-ply. So I'm not vouching for everything it claims, and once again, if your view differs from the one given here, that's what the comments box is for.

All of what follows has been put to Chess.com. (In fact, rather more than this: when emailing them I drew attention to quite a few manifestly inferior moves, ones where the computer sees many superior alternatives. I've omitted them here for the sake of relative brevity, but they are there to be found, if it should please you to look for them.)

I've not received an answer to any of them.

Here, as an aperitif, is a quick game, but not one so brief that it doesn't contain a remarkable miss by the winning side.

White played 12 Qc4 here, a perfectly good move, and for that matter one after which White may well be winning.

However, there is something stronger. See if you can spot it.

Or if you can't, ask your program, which will point it out immediately. 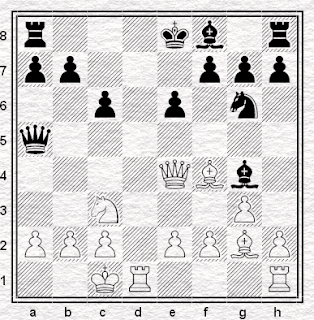 But I didn't ask DroidFish, did I? Not until after the game had finished.

Next, take a look at the game below, or just skip to the three diagrams that follow it.

There's any number of second-rate moves in this game. Here are just some of them. 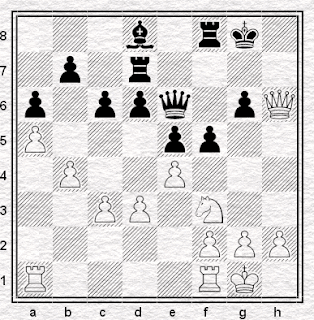 In this position I played 25...f4. But why not play 25....fxe4? It gives me a winning advantage after an exchange sacrifice on f3.

DroidFish sees it immediately. But I didn't see it. Could these two things be connected?

And why play 25...f4 anyway? White could have played 26 Qh3 with a sizeable advantage. Droidfish sees that move.

But I didn't see it. 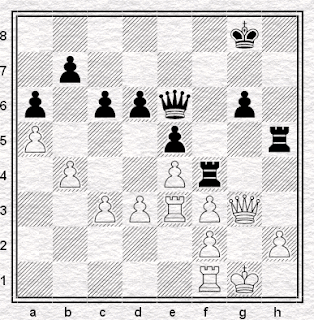 I played 31...g5 here, which gives White a couple of ways to establish a large advantage.  (32 Kg2 and 32 d4 are favoured by Droidfish.) Why play like that? Why not play one of several better alternatives? 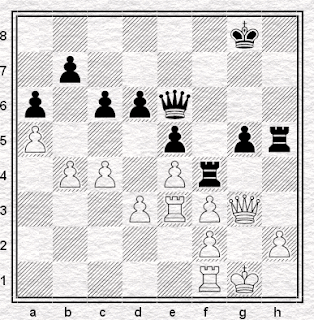 Black now played 32...Kh8 (again, there appear to be several superior moves available) with the idea of ...g4. But this idea fails to 33 Kg2! g4 34 h3, which DroidFish sees easily but which - because it allows the captures on h3 - is a lot harder to see without one.

Which is probably why I didn't see it.

Again, there's all kinds of inaccuracies in this game (just to draw your attention to one of them, 17...Nb4 allows 18 Rxe6 which is at very least a promising sacrifice) but the way play went from the position below seems to me inexplicable. Inexplicable, at least,  if we're looking to computer use as an explanation. 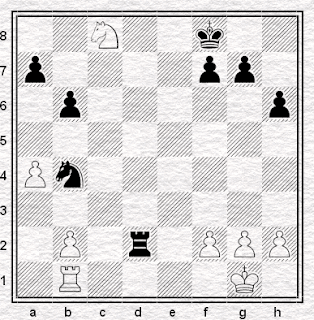 I played neither move, but instead chose 33...Nd3 - which demonstrably leads, and did in fact lead, to an extremely drawn ending (even though White contrived to lose it with 41 g4??).

Why would I play like this if I knew there was better? Why turn winning chances into a draw?

It's nonsense, isn't it?

The following game includes a number of spectacular oversights. In fact, with the first three diagrams I'll invite the reader to solve them without even consulting a program. 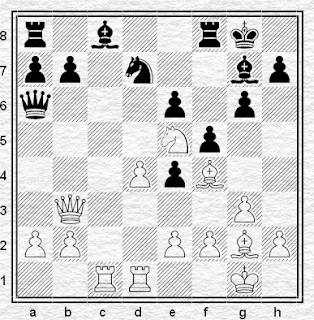 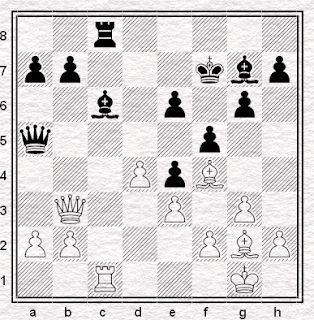 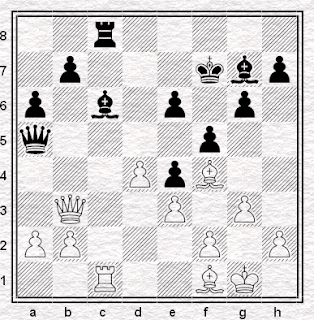 (a) I played 15 Nxd7, which is level. Why not just win the game with the elementary 15 Rxc8, getting me two pieces for a rook?

(b) I played 22 Bf1. A minor point is that this allows 22...Bd5, after which White would have had a hell of a jopb trying to create winning chances. But a more immediate point is that 22 Rxc6 wins immediately!

(c) I played 23 Rc5. But I think you can find the right move, if you have not found it already.

DroidFish sees all this instantly, of course. And at this point I'd invite you to consider how galling it is, after having found these moves only after the game and with a program, to be told that I must have been using a program during the game itself. 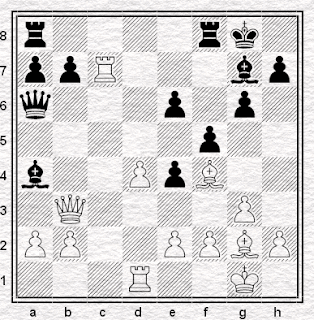 This last example from this game isn't quite so serious, but worth looking at, because there are two moves for White here that don't lose instantly. I found one of them all right, but the one I found, 17 Qb4, was clearly the worse of the two. (17 Qa3, which makes ... Bc6 hard to achieve, gives White the advantage.)

At the risk of boring the reader through repetition, there are quite a number of poor moves in this game and when writing to Chess.com I gave a lot of examples. But let us here confine ourselves to two.

In order to lose a game, you have to miss chances not to lose it, and I did. Once again, why would I do that? 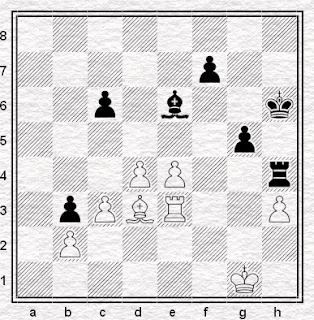 You'll quite likely need to look at both examples on your computer, and for all I know your computer will disagree, but I played 38...g4 here, which DroidFish tells me is losing.

Maybe I should have asked it at the time, eh? Instead of what I did, which was to spend long hours analysing both moves, and choosing the wrong one. 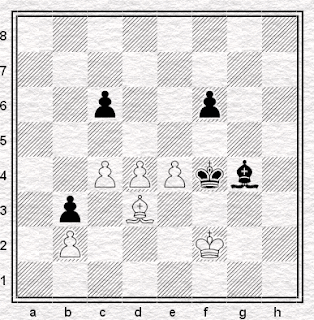 I had a second chance, and blew it. DroidFish tells me there are all kinds of bishop moves here which appear to comfortably hold. But I panicked, and played 44...c5, which doesn't hold at all.

I don't think this is how somebody plays when they're using "outside assistance". I think it's patently how they play when they're not.

Of course there's an obvious answer to any and all of this, which is that a sophisticated computer user would of course seek to disguise their computer use by making mistakes here and there.

Well for sure, no doubt they would.

I mean maybe I just played these five games clean, and employed a program in all the others. Fine, show me how that works, the other seventeen games must be some high-level stuff, yes? But if you take a look, you may find that on the whole they're plodding games, like the ones I usually play.

You can never prove you weren't using a computer. But does any of this make sense?