Ever get the feeling you've been cheated - wrong in fact, wrong in theory?

So how does Chess.com's system work anyway?

I don't really know, and I don't particularly want to speculate, not more than I'm obliged to. It ought to be up to them to explain themselves, not up to me.

What I think, however, is that their method to some degree involves looking at the moves you have played, and seeing how many match with the preferred choice of a computer program. Whether they do anything else, or what precisely their criteria are, who knows. (But how reliable those criteria are - on that, I do have a well-informed opinion.)

One question this raises is - since there is such a thing as theory in chess, when in the game do they start scrutinising? Presumably not on move one. But if not, at what point does the matching begin? If they start too early, when in fact you're still in book (because book use is permitted in these games) isn't that a point where errors can be committed? Because moves which you're finding from a printed source are being marked down as moves you're finding with a program?

When you finish a game on Chess.com, you get a little game report, which includes some basic computer analysis, and a chart that looks like this. 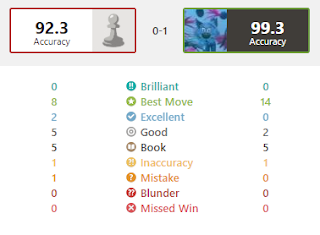 So we've got a twenty-two move minature, in which Black plays five moves of theory, and then turns over White in short order with an extremely high Accuracy rate. Which is pretty suspicious, isn't it?

Except it isn't. Because this, which suggests that theory ends after five moves on each side 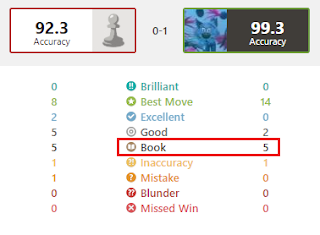 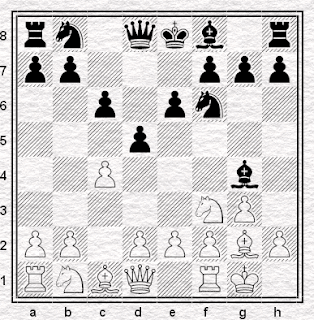 In fact Black was playing published theory until move sixteen.

Specifically, he was following Petrosian v Vovhannisyan, Lake Sevan 2015, which you can see below (to move 14, but as there was a repetition, we had played two more moves apiece) as it appears on page 202 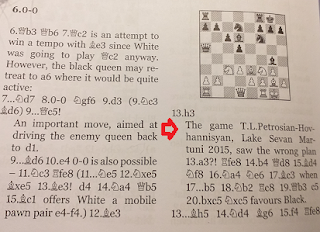 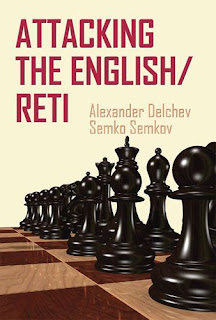 which I have on my bookshelves.

Which is how I came to be in the position below, after Black's 16...Qd8, before I had to play any moves of my own. 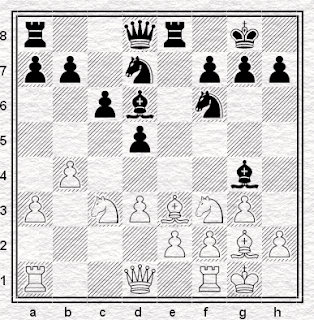 White then varied with 17 Rc1. So my original contribution consisted of five moves - five very ordinary moves - and then, after a simple blunder by White 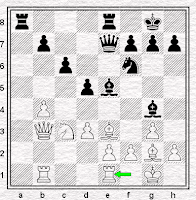 a very obvious pawn fork to win the game.

Suddenly the game looks very different, doesn't it? Suddenly it's perfectly normal, unexceptional. Suddenly there's nothing odd about it at all.

Here's a few more examples. This game, for instance.

According to Chess.com, we have seven moves of theory for White, and six for Black 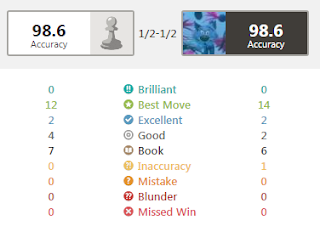 which is a funny thing to say anyway, since Black's seventh is forced. But leaving that aside, it would get us this position,  where Black is apparently starting from scratch. 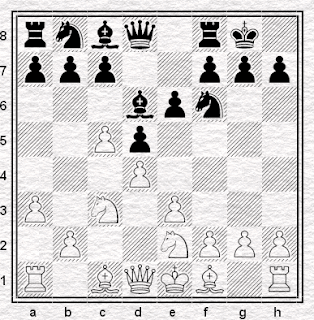 But he's not starting from scratch. he's not even halfway there. Because in my theory here goes as far as move twenty, as per Guliev-Arkhipov, Dubai 1999. You may have to hunt about a bit there to locate the score, or you can find it, as I did, on page 174

of Emms, The Nimzo-Indian move by move, Everyman, 2011 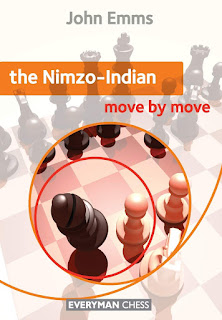 which I have on my bookshelves and which brought me to this position without yet having had to play any of my own moves. 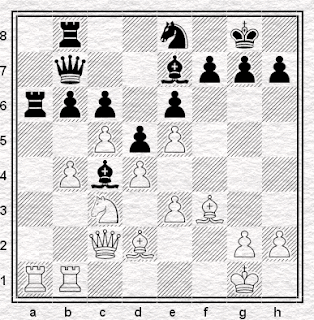 After 21 Rxa6 I once again played five moves - in my view even less distinguished moves than in the previous example - and I then asked for a draw.

(Why would Black, by the way, be using computer assistance in order to play a dull draw in twenty-five moves? Nobody knows. But none of this makes sense.)

Then there's this game, another draw as it happens.

in which according to Chess.com 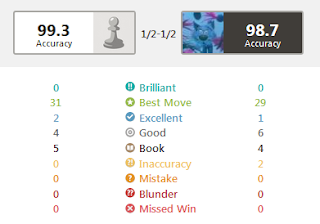 we played five moves of theory for White, and four for Black, reaching this position. 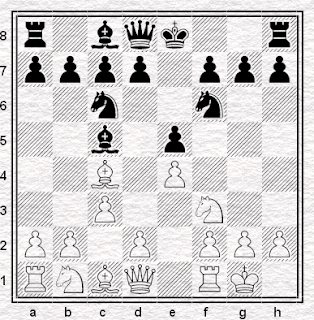 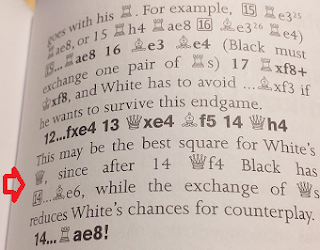 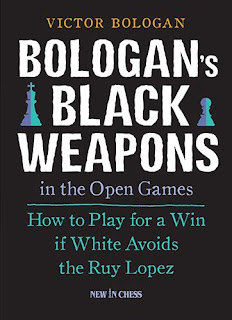 so original play only started here. 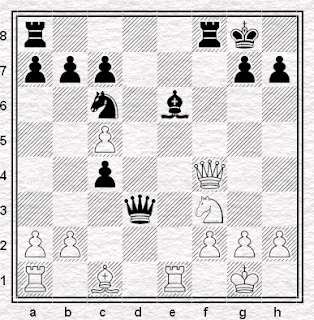 Again, why Black would user computer assistance to play forty-two dull moves for a draw is a question for Chess.com. It's not a question they seem keen on answering.

One more, for now.

You may remember some fragments from this game in the previous posting (and as I asked then, why would Black be using a computer to lose a long game with lots of errors in it?) but in this one, theory supposedly takes us to move five 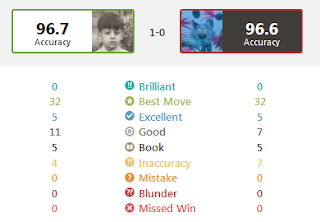 which is this position. 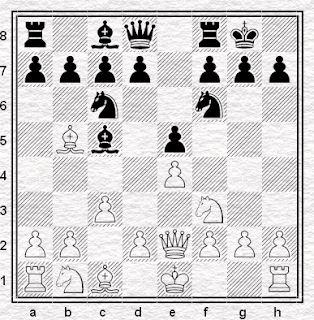 But in fact, I was following, by transposition, Meijers v Crouan, Sautron 2009. No link, sorry, but here it is on page 99 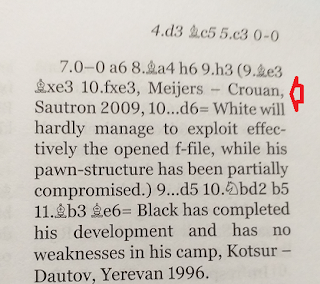 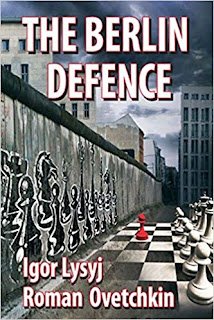 so I was still in theory up to here. 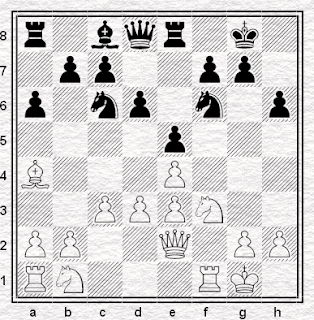 I've not been through all my games for this exercise, by the way, wishing to bore neither myself nor the reader. But even so, I'm aware that there are more examples than just these four.

I don't, of course, know for sure - or really at all - how Chess.com come to their conclusions, nor what role may be played by the Accuracy or Book figures.

I don't know, because they do not say. But I know that some of what they do say is a manifest nonsense.

And what happens if you try to draw conclusions from nonsensical data?

[For the record, I referred the first two of these queries to Chess.com, and they ignored them. I've added the other two to this piece, because why not.] 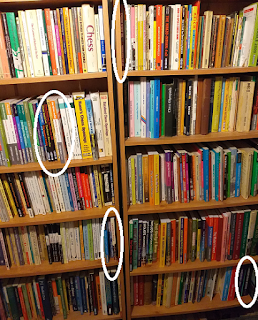 A friend of mine, a master, just won a blitz game on chess.com with "98% accuracy". As he showed me, the only "blunder" chess.com thinks he made was the horrible move 1.Nf3 ... everything else was "pefect". The chess.com accuracy algorithm is nonsense.

I suppose this is an urban legend.
1. Nf3 surely was not a "blunder" but a "book move", also at chess.com. (Btw, also the category "perfect" does not exist there, but I would not stick to that wording ..).
Maybe you can ask your "friend" for a screenshot of the analysis, then I would believe it ...