Ever get the feeling you've been cheated - there's nothing there

Banned from the Roxy, OK
I never much liked playing there anyway
- Crass

I've been playing competitive chess for more than forty years, over the board, by correspondence and on the internet. This is, by a margin, the most disgusting thing - and the most upsetting thing - that has ever happened to me in all that time.

As you might surmise, I don't really give a damn whether I ever play another game on Chess.com. There are other places.

What I do give a damn about is my good name, and the willingness of Chess.com to dirty my name, just as they have dirtied other people's names, without having to justify themselves in any way, without having to put forward even the smallest scrap of evidence.

It's not just the principle of the thing, that the process is plainly contrary to natural justice. It's the effect of being accused, without being able to see, let alone challenge, what is alleged against you. That's psychologically distressing in a way that I don't think I can describe. So I won't attempt to, except to observe that it's cost me an awful lot by way of stress and disturbed sleep.

What they don't have the right to do is to call somebody a cheat without backing it up.

But that is what they have done. 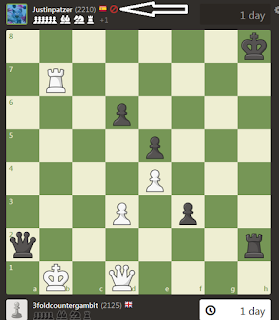 And that's disgusting, when you're on the receiving end. That's mud, and mud sticks.

Just as I don't much care if I ever play on Chess.com again, I don't much care how and why they came to do this. I certainly don't owe it to them to presume they're acting in good faith, any more than they have presumed the same about me. (Which is to say, not at all.)

The best construction I can put on their actions is that they made a serious error, either because their system is badly flawed or for some other reason, and that they have been unwilling to contemplate the possibility that they did so. Perhaps because to do so would open themselves up to other complaints. Perhaps for other reasons. Who knows? I really don't care.

But I do care about my reputation, and Chess.com really ought to apologise for putting that at risk, with whatever grace they are able to muster. And if they don't, I hope it is their reputation, and not mine, that suffers in the long run.

I mean what is any of this for? What's the point?

Look at the games. There's nothing there.
Posted by ejh at 12:00 pm

It's an automated "flagging" based on their computerized chess engine.

A friend of mine, a strong master, showed me he was suspected of "cheating" by this engine because he played a game with "98% accuracy". The engine missed all his actual inaccuracies, but didn't give him a 100% score because he started with 1.Nf3. According to chess.com's engine, the only two "correct" first moves are 1.e4 and 1.d4. It's only patzers like, say, Kasparov or Botvinnik that play anything else.

It's a totally hopeless bot.

This sounds ridiculous. But only because it sounds so badly made-up ...
I doubt you or your "friend" have ever been on that site - at least you seem to have no idea of the postgame analysis there ...

I don't know you, except I follow you on twitter for political reasons and stumbled across the fact that you also play chess and just wanted to say that fucking sucks and makes me rate chess.com less

Thanks. As it goes, a few months ago, chess.com relented, admitted (via a Facebook discussion) that they got it wrong and reinstated me. I've not played there since, but at least my name has been cleared. I am less than happy with what they did, how they went about it and the absence of any proper explanation, and I generally regard them as a disreputable organisation, but still, they have at least backed down.

I've considered writing a further post by way of an epilogue and maybe one day I will do this.

I'd love to know who you spoke with on Facebook. My son, whose games are supervised, was accused of cheating and banned.