As veteran readers may recall, during the last couple of years of the Streatham and Brixton blog, my colleague Jonathan put together a large number of articles detailing the long trail of overstatement, hyperbole, fantasy, misuse of studies and similar whatnot relating to chess and its supposed role in preventing, reversing or warding off the onset of Alzheimer's. Many of these claims refer to the Verghese study in the New England Journal of Medicine in 2003 - or purport to, since it doesn't even mention chess - but rather less has been made of a study to which Leontxo García is fond of referring.

This study appeared in Neurocase in 2005 and is entitled Knight's move thinking? Mild cognitive impairment in a chess player.2 It discusses the case of a keen chess player in the North-east of England who, after his death, was found to have been suffering from Alzheimer's. Sr. García included it in a small collection of material he supplied to FIDE in 2011, it is mentioned (as per the excerpt above) in his piece Checkmate To Alzheimer's which appears to have been written some time in the decade previous to this one and he also referred to it in a talk, apparently entitled Can Chess Help Prevent Dementia? that he gave to the London Chess Conference last December.


The talk appears to have been quite heavily cut so I wouldn't want to take the video above as a definitive version, but we can see from the slides that Verghese is invoked 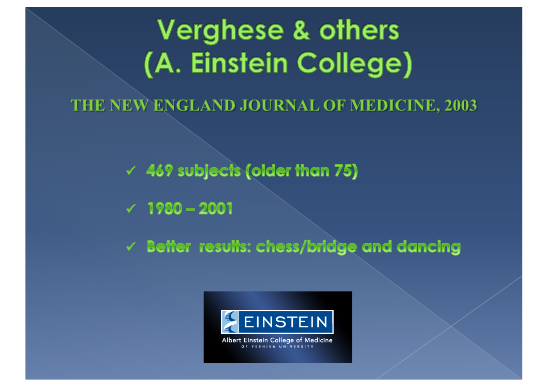 before the talk moves on to the Neurocase study. 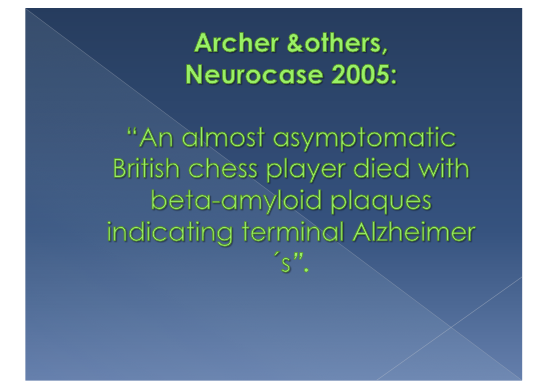 Because the video has been cut I really want to discuss how Sr. García describes it in his "Checkmate" piece, but there are a couple of moments in the December presentation that readers might find odd - and revealingly so.


dies in a traffic accident.

No he doesn't. Because I've read the study3 I'm aware that it actually says "unexpectedly he died of an unrelated illness seven months later". No traffic accident. No accident at all.

The second is that he says of the post mortem


when they open the brain, they are amazed.

"Amazed" does not come from the study. The state of the subject's brain was not as expected, but that's a long way from "amazed" or indeed any similar term - like "astonishing", the term Sr. García uses in Checkmate To Alzheimer's.

The impression one might form from this is that neither the content nor the tone of the study are exactly as they are being presented.However, what really takes the eye in that passage - if you've ready the study - is this sort of claim:


The hypothesis is clear: playing may not prevent Alzheimer's, but it does delay it.

The "hypothesis" is "clear". So says Leontxo García, but it's not clear enough to the eight professionally qualified authors of the study to actually appear in the study itself, let alone be advanced with any certainty. It is not "clear": it is not, in fact, present at all.

There is not a single word devoted to the hypothesis that playing chess may in any way delay the onset of Alzheimer's. The discussion is about the limitation of diagnosis, in so far as in this instance a person who played chess underwent several tests over a long period, reported a decline in his mental capacities, for instance that


whilst previously he could plan his game seven moves in advance, he could now only plan three or four4

but not so significant as might have been expected, given the state of his brain as discovered by the post mortem.

It doesn't tell us anything about the supposed capacity of chess to "delay" Alzheimer's and if it did, you would expect the study to say that it does, or to hypothesise that it might. It does neither. Sr. García has inserted a hypothesis into a study which the study does not possess.

As it happens, the first time I can recall making acquaintance with the Neurocase study was in a Twitter discussion with Sr. García last Xmas (yes, I should have had better things to do) which followed his retweeting of a ropey Alzheimer's piece accompanied by a hyperbolic claim - "also proven to be very effective" - about the allegedly beneficial effects of our game.

As we switched languages early on it may be hard to follow for those lacking Spanish, but see how you get on. I mentioned the 2014 statement5 by "many of the world's leading cognitive psychologists and neuroscientists" which among many other things, said the following:


We object to the claim that brain games offer consumers a scientifically grounded avenue to reduce or reverse cognitive decline when there is no compelling scientific evidence to date that they do.

This didn't seem to impress Sr. García, who replied:

The article says "cures or prevents Alzheimer's", I say delay for a long time or perhaps prevent, which is very different.

Now I don't think that saying "perhaps prevent" ("tal vez prevenir") is especially different from making a claim that chess can prevent Alzheimer's, in fact it's a bald statement that prevention is possible, but let us move on to what followed 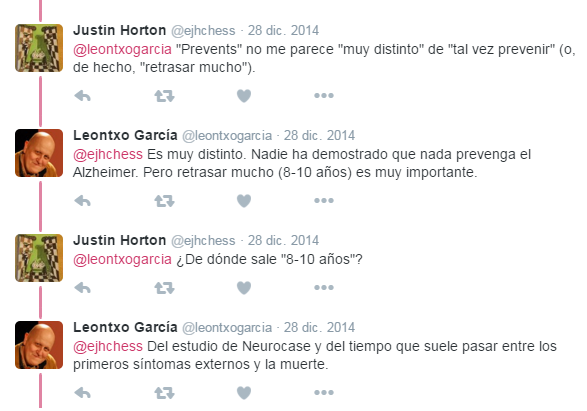 in which Sr. García made the claim that the period by which Alzheimer's might be delayed could be as long as "8-10 years", which claim he ascribes to the "estudio de Neurocase".

Only - and don't stop me if you've heard this one before - no such claim appears in the Neurocase study.

Of course it doesn't.

Still, why let the facts get in the way of a good story?

I watched the video and scrolled through the slideshow and then I wondered whether Edward Winter had had anything to say about Leontxo Garcia. I was surprised not to find anything.

The 2005 article is well-known in the expert community, and long superseded. It's part of the debate about 'cognitive reserve' - that is, whether forms of mental stimulation (chess, puzzles, reading, anything similar) build up a reserve of cognitive capacity that can be drawn upon as the physical deterioration of the brain proceeds. The impression gained by the naive observer is that the disease has been 'delayed'. Alas, not so: the underlying physical decline continues unabated. Moreover, it's not clear whether a 'cognitive reserve' acts as I've just suggested. Recent research shows that different memory functions decline (or are retained) differentially by gender, education, and occupation. Hence, memory is not a unitary function to be lost (or retained) all of a piece.

I have more, lots more. And it's pretty authoritative, albeit I'm not the expert. By happy chance, in the first round of this year's 4NCL, I played one of Britain's most prominent research experts in Alzheimer's. We've spoken and corresponded at length since. One thing can be said with certainty, in a far from well-understood field: Alzheimer's is not susceptible to 'magic bullet' solutions. And chess offers scant prospects either.